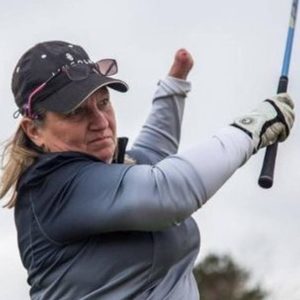 Gianna Rojas, aka: The "One Handed Lady Golfer" - Founder of Adaptive Golfers

Known worldwide as “The One-Handed Lady Golfer”, Gianna Rojas, was born without fingers on her left hand, forcing her to learn early on to adapt herself to whatever life threw at her. She founded Adaptive Golfers then launched [AdaptiveGolfers.org ](AdaptiveGolfers.org )to serve as a resource for people with different abilities, helping them play to the best of their potential.

Gianna was recently named to The LPGA Women's Network "Meet the Disruptors: 22 Women who are Spearheading a Revolution in Golf" list.

She stated that "It is such an honor to be named in this prestigious list of woman who are making a difference in peoples lives through golf. Adaptive Golfers is all about using golf to improve the quality of life for individuals with cognitive, physical, sensory, health and age related challenges. Golf lends itself very well because it is an activity that can be played alone of with others. I like to say it is between you, the ball and the hole. Neither the ball or the hole care if you roll it with your nose or if it even gets there. It is the conduit to get individuals out of bed, out of the house, and out of their heads. I like to call it Adaptive Golf Therapy!"